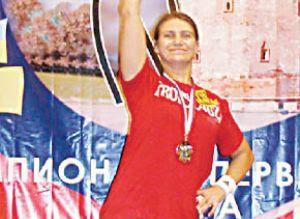 June 5, 2010
-Looking after this woman, you guys are not even aware that she was world record in snatch 24 kg kb (137 times in 10 minutes), winner of a record in non-traditional regimen OAJ weights 28 kg (470 times with one hand without rest for 1 hour 20 minutes ). The other day international master of sports of Temirtau Tatiana Potemkin at the European Championships in Lithuania set a new world record – 36 times without stopping the right-hand snatched 32kg kb.
It’s a shame will be if it “thrown
-In Russia and Europe called the Tatyana sporting phenomenon. Weighing 68 kilograms, she playfully, and with eyes blindfolded, juggling a loaded weight of 24 kg. A projectile weighed a stone for her – all toy: his argument for it may raise a few hours – until you get tired of those who argue.
-- A long time I picked up a sport for the mind: running, swimming, – says Tatiana. – But seeing the show of weightlifter, I realized: this is mine! When it came to the gym and said that I wanted to do weights, men laughed at me. But this only add gambling rage. At first it was very difficult: with a huge effort, almost with tears in his eyes, lifted a weight 16 kg. Men’s all a long time could not fulfill. The fact that the jerk 24 or 32 kg, could only dream of. Right now, my unofficial record with eighty-pound weight mounted on a workout – 130 times with his right hand and left 120 with a ten-minute break. Then fate brought me together with Andrew Bobrysheva, who became my mentor and manager. With his light hand and started my sports career. The first won a bronze medal at the 2006 World Championships in Latvia, then invited to Peterhof – the youth athletic festival, where I had a half hour 470 times pushed the weight to 28 kg. Not everyone believes that I like so I can easily lift weights. Sometimes people come to practice and feeling the shell: it is real or dummy? Some do not consider myself extraordinary, I just like working with weights. One of the favorite activities – juggling 24-kilogram shells blindfolded. When they start to throw up – I experienced an extraordinary burst of energy. Perhaps this sort of feature of an organism, – laughing iron lady.
Win “label”

At the peak of sporting glory in 2007, Tatiana came under the knife of a surgeon. Suspected of oncology, but nothing happened. However, health has suffered greatly, and many then thought that she would not return to their favorite toys.

Now Potemkin began preparations for the first European game for the weight-lifting in 2011 and the World Games for non-Olympic sports, where she plans to take the gold.
Publié par Unknown à 13:13